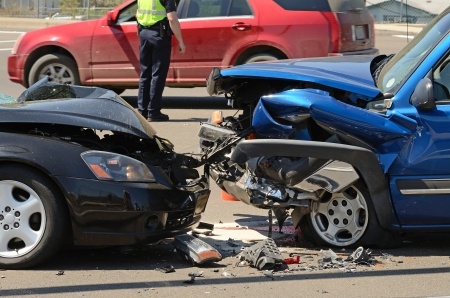 Different Types of Evidence to Gather After an Accident

Immediately after a car crash, drivers should check to see if they have any serious injuries. When necessary, accident victims should seek emergency medical treatment immediately after an accident. If this treatment is not necessary, drivers can proceed to collect evidence and gather information. If seriously injured, accident victims may collect evidence after the fact.

The driver should exchange information with the other driver(s) involved in the crash:

In terms of evidence used to prove fault in the accident, filing a police report is one of the best things a driver can do to protect oneself.

Further, drivers are actually required to file these reports if the accident involves serious injury, death, more than $400 in damages, or uninsured drivers.

Pictures of the accident scene are good evidence to gather after the accident as well. Take pictures from many different angles. Record any skid marks and make sure to include traffic signals or stop signs in the shots. If a witness gives an account of what he or she saw, take a picture from where the witness stood at the time of the accident to see that person’s viewpoint. You can also record the name, address and phone number of any witnesses for use later.

How is fault determined in a car accident?

Insurance adjusters and/or courts will look at a variety of evidence, including traffic citations, police reports, testimony, pictures and other evidence submitted in the case to determine each party’s fault based on a scale of 0 to 100 percent at-fault.

If from the evidence, it seems like one driver did little to cause the accident, may be zero or 10 percent at fault, for example. Ohio is a modified comparative fault state, so claimants or plaintiffs need to be 50 percent or less at fault in an accident to collect compensation for their damages. Even if less than 51 percent at fault, any percentage will reduce damage recovery proportionally.

Will all evidence be used in my case?

Like other civil cases, car crash cases include a pre-trial discovery period. During discovery, the parties submit requests for admission to the court when they want to enter a piece of evidence into the proceeding. The request is sent to the judge and other party in the case, and if the other party doesn't respond to the request within 28 days, the evidence is automatically entered into the trial. When parties feel a piece of evidence violates a rule of evidence, they dispute the request at a hearing in front of the trial judge.

Ryan, LLP is committed to helping Cleveland accident victims pursue compensation from insurance companies and others in car accident cases. Contact our office at 877-864-9495 or contact us online to set up a consultation.