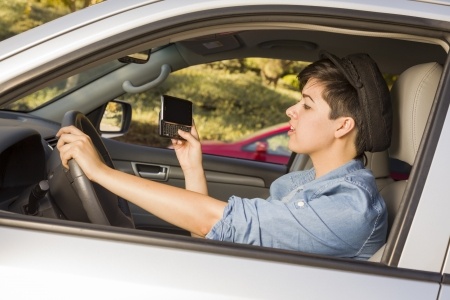 One of the primary forms of distracted driving is texting while driving. It's quite a common practice. “At any given daylight moment across America, approximately 660,000 drivers are using cell phones or manipulating electronic devices while driving,” reports Distraction.gov, citing a National Highway Traffic Safety Administration survey.

Texting and talking on the phone isn’t the only thing that steals drivers’ attention. Other types of distracted driving include:

The Prevalence of Distracted Driving

According to the National Highway Traffic Safety Administration (NHTSA), 10 percent of all fatal crashes and 17 percent of all injury crashes in 2011 were attributed to distracted driving. More than 3,300 people died and 387,000 more were injured in crashes that were preventable if not for driving distractions.

Young drivers are particularly guilty of distracted driving; the 15- to 19-year-old age group has the highest proportion of distracted drivers, reports NHTSA.  Other startling statistics from this study include:

“[E]ngaging in visual-manual subtasks (such as reaching for a phone, dialing and texting) associated with the use of hand-held phones and other portable devices increased the risk of getting into a crash by three times,” reports VTTI. Cell phones and driving are deadly, plain and simple.

In one distracted driving case in which a teenager was texting and driving and consequently killed a woman, the presiding Judge Robert Reed was fed up: “Eleven of you will die in this country every day because of texting and driving," he said, according to New Jersey media reports. "For God’s sake, stop it!”

Free Consultation with an Accident Attorney in Cleveland

If you or someone you love was injured in a car accident as a result of someone else’s negligence or distracted driving, call Ryan, LLP in Cleveland today. Let us help you recover damages and get the full amount of compensation to which you’re entitled. To schedule a free consultation, contact our accident attorneys today at (877) 864-9495.