Home » How to Deal With a Tailgater

In road, there are various risks that a driver and vehicle occupants will be exposed to and these risks are caused by multiple factors. Usually these factors are generally identified as mechanical errors, environmental factors, and lastly, human errors. All of these factors are deal wide range of damage which commonly results in sustenance of injuries and even death. Human errors have high fatality as the driver itself is the cause of the accident, some examples are drunk driving, drugged driving, aggressive driving, and tail gating.

In this blog, we are going to discuss how to deal with a tailgater as it is a dangerous road behavior which has tolled deaths that contributed major numbers in terms of annual death counts caused by car accidents in general.

According to a data gathered by National Highway Traffic Safety Administration (NHTSA) in 2017, 14 out of every 10,000 drivers in U.S. have a traffic citation for tailgating. 33% of car accidents that year were rear-end impacts which probably stemmed from tailgating.

Tailgating is a risky road behavior of following a car behind at relatively close distance, on either low or high speed pacing. It roots from various reasons such as simply exists due to hobby, anger and frustrations developed during a traffic congestion, and other personal reasons. One common reason is that they tailgate as the front driver might be driving too slow and the tailgater wants to check if there are problems occurring in that specific vehicle but regardless reasons they have, tailgating is dangerous and should be discouraged and tailgaters are putting themselves as well as the driver in front of them in danger. 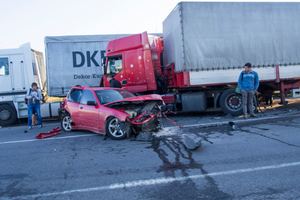 There are few ways to deal with a tailgater and in this list, we have collect sound steps to do so.

Put negative emotions such as anger aside while dealing with a tailgater to help yourself formulate a solution to deal with the situation and avoid making impulsive actions such as retaliations and resorting to violence.

Try to Drive to Road Side

Try to create Distance with the Tailgater

Even if those tailgaters are the one who cause inconvenience, try to compensate for the situation by creating distance with the tailgater by driving at a consistent speed as this allows you to have a longer braking distance.